Fun facts about Gullane and Aberlady

Accessible by public transport, it is best reached by bus.

There is no train station  – the nearest station is North Berwick, Drem, Longniddry.

If travelling by car – there is a car park at Gullane Bents (beach) and at the footbridge in Aberlady Bay. You could do a round-trip the same way (12km) or take an alternative route.

Why not start your walk by going down to the gorgeous Gullane beach for a refreshing dip in the sea?

We did this walk in early September and although the water was quite cool it was so refreshing and exhilarating – I highly recommend it! It’s soft sand most of the way out and it gets deep quite quickly allowing you to swim not too far from the shoreline. Go and do it!

Or a walk along the dunes?

The dunes are full of little pathways you can go exploring and enjoy the views from higher ground.

Or enjoying an ice cream while overlooking the bay?

We got ice creams from a little van stopped in the Gullane Bents car park. It was about £2 with all the trimmings (sauce, sprinkles and a chocolate flake)!

Or just being soppy?

From the west corner of the car park above the beach the path begins and heads out along the coastline with amazing views over the Firth of Forth and rocks. 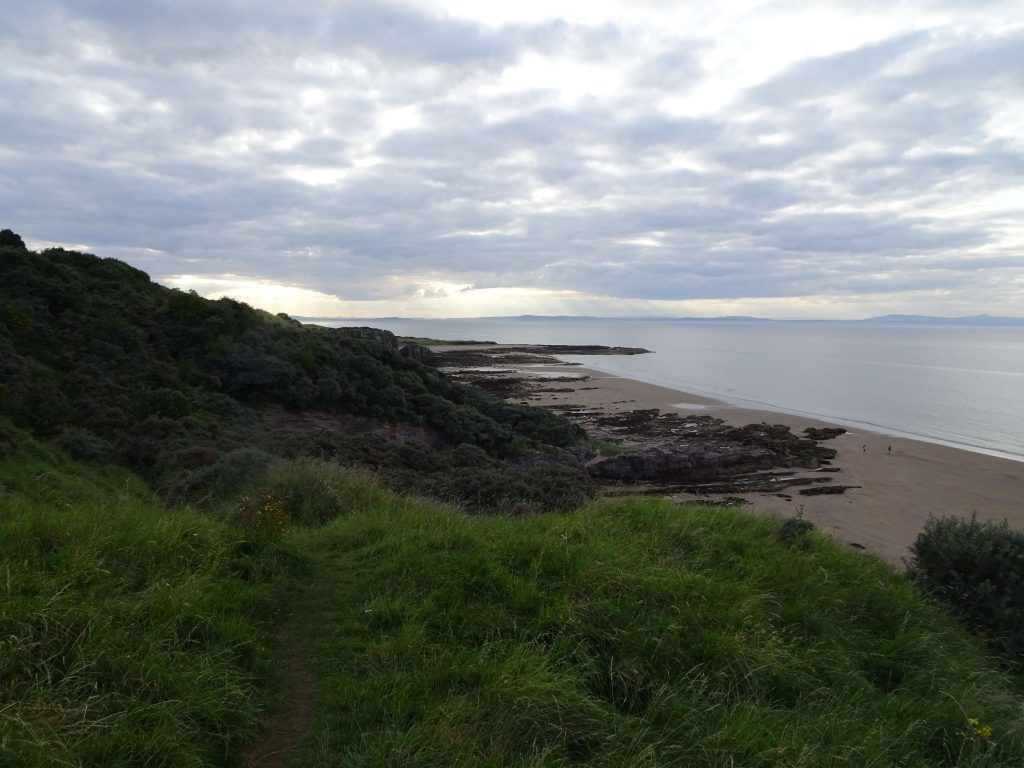 Either side of the path you’ll find plenty of seabuckthorn bush covered with bright orange berries. This plant was thought to have been introduced to the area protect the coastline against erosion and dune stabilization but as it is not native to the region it spread quickly and densely and prevented other species of plant from thriving. Now the seabuckthorn is managed with the aim to create a balance in conservation. The plant does provide a habitat for breeding birds and shelter for foxes and roe deer which you may be lucky enough to spot leaping across the dunes!

Heading along the path (overgrown in parts) uphill away from the coves the walk continues around the Gullane Golf Club and over Gullane Point. Emerging over the brow the view really opens up and offers spectacular views across the forth and over the rocky cliffs to the beaches below.

Looking out over the water to the west you’ll be able to see right across the Forth to the Queensferry Crossing and Forth Road and Railway Bridges, and Arthur’s Seat and the Pentlands in Edinburgh. 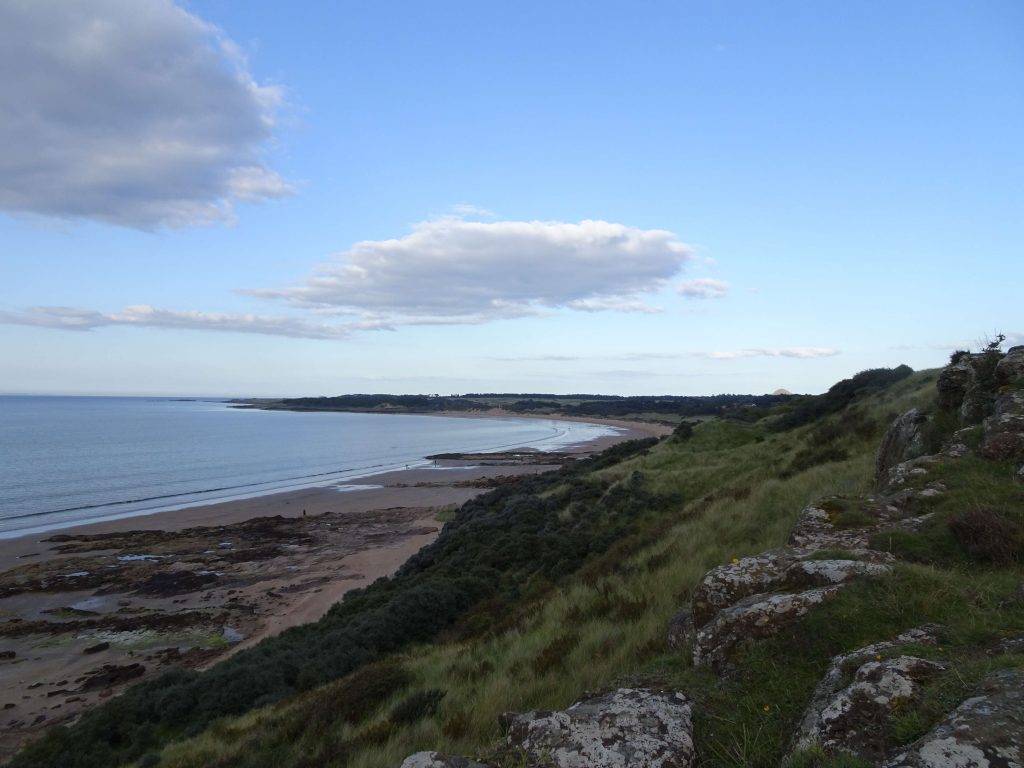 Coastal defenses, remnants from World War II, in the form of anti-tank concrete blocks can be seen arranged in long rows along the beach and dunes. These were strategically placed to create barriers for tanks and artillery landing from the sea. Follow the green way-markers between these where the path will lead downhill through the bushy dunes to another pretty cove. 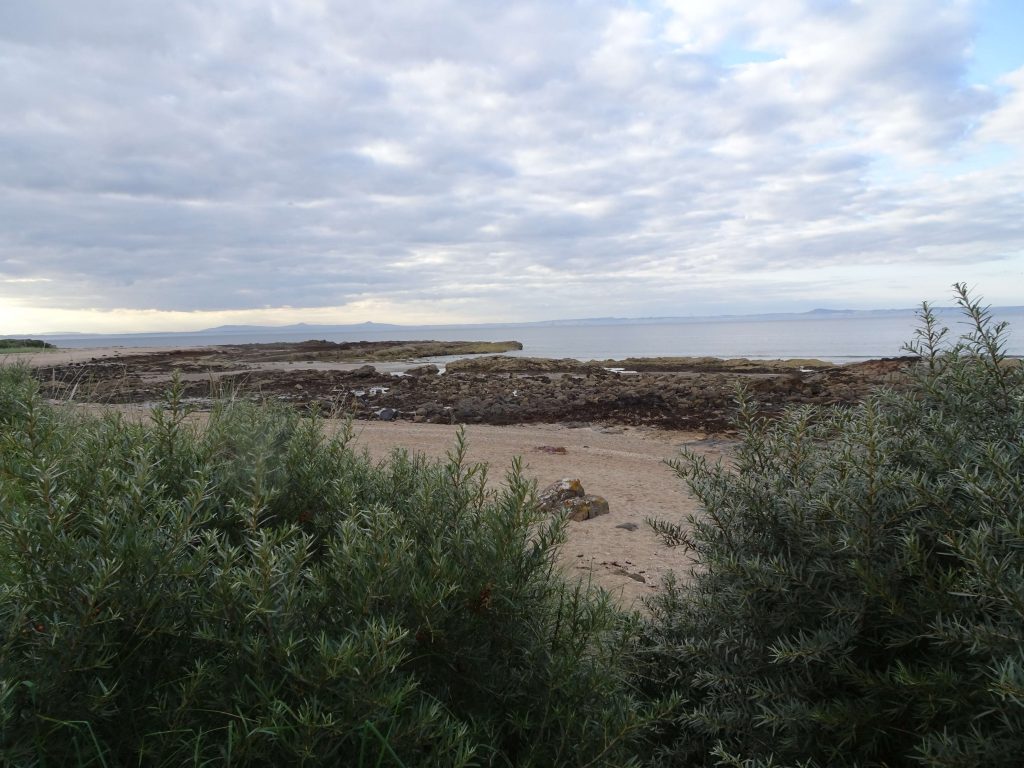 The path then stretches on through flat ground and gradually opens out wide following the beach on the right and high dunes towering above on the left. It was here we saw many herds of roe deer which would take a quiet moment to stop and observe visitors before taking shelter between the seabuckthorn bush.

Continue along the clear path following the signs to Aberlady. Following the end of the golf course the path will become increasingly grassy and you’ll pass through marshes and fields with gorgeous views of the rolling hills. 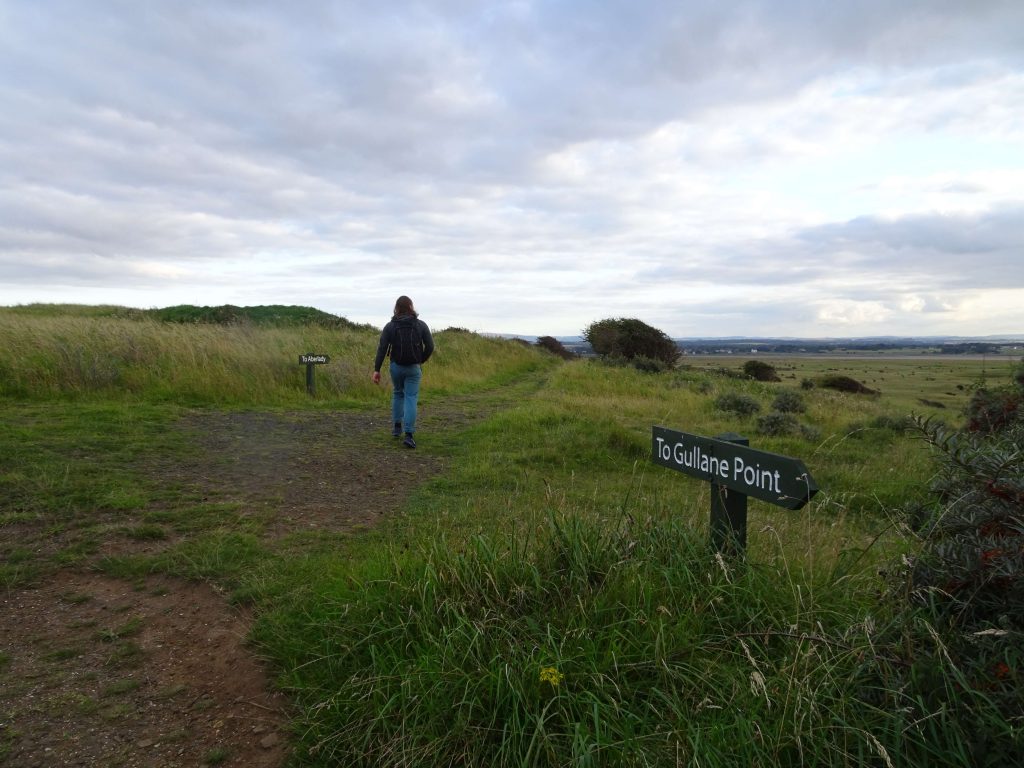 You may meet another friend along the way, and Aberlady is in sight!… 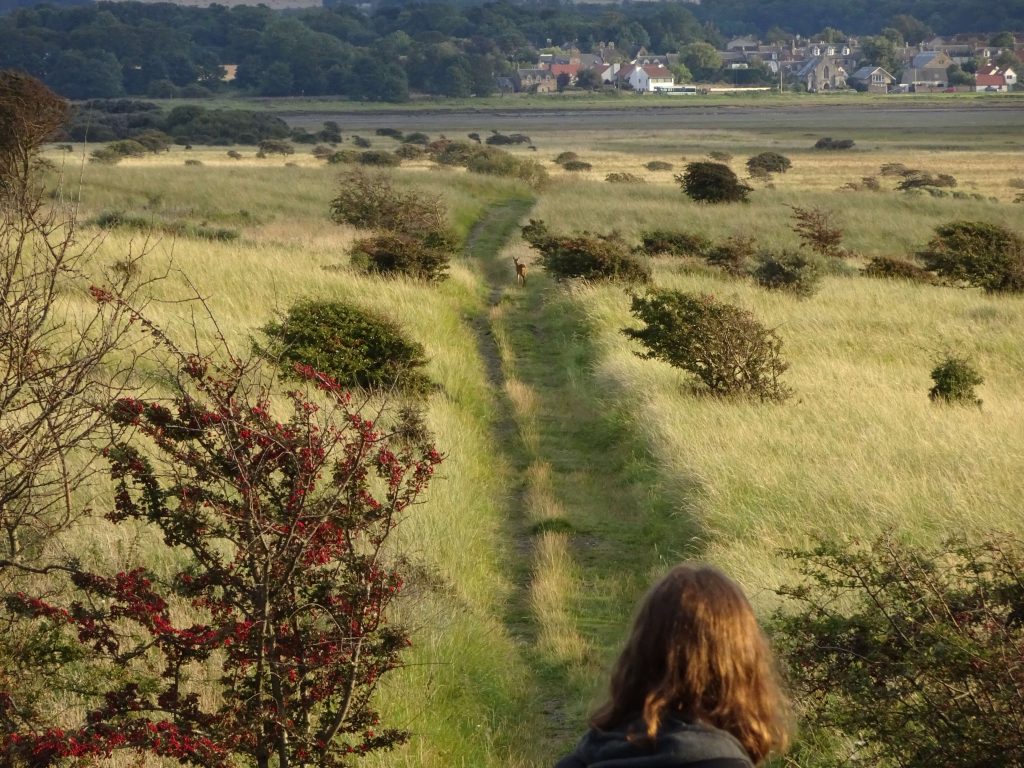 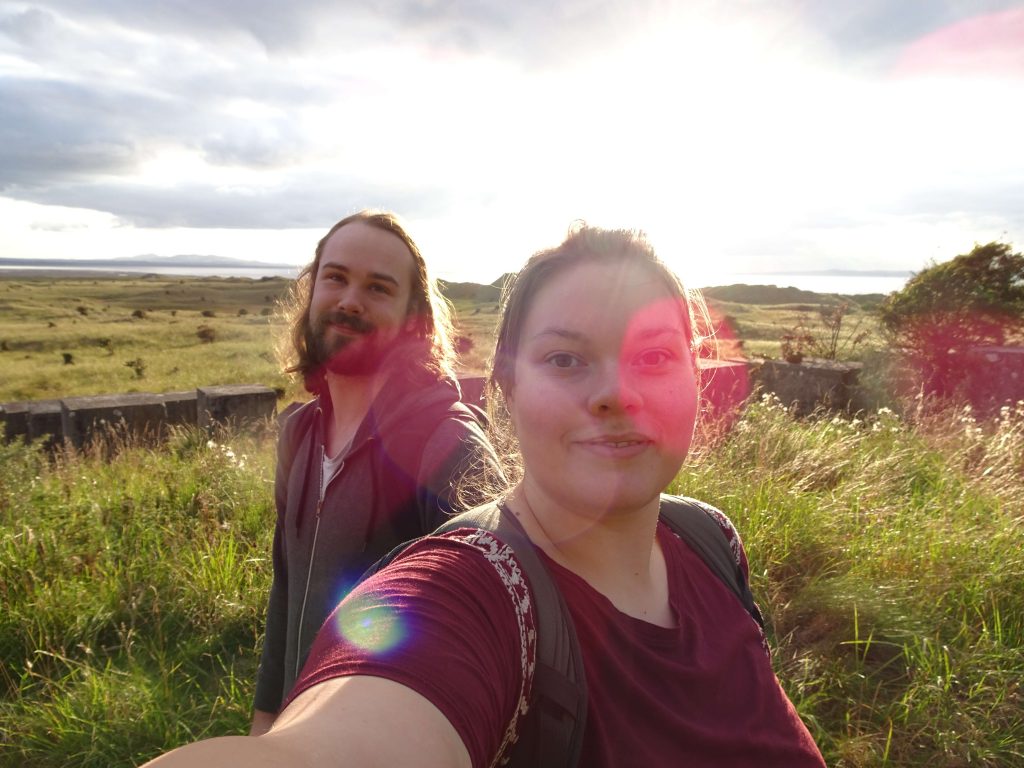 Continue along the path which will bear right at a fork and head south between the nature reserve and a golf course. The track will narrow from open fields to a clear pathway with a fence along the left edge and trees to the right. You’ll have views of Berwick Law, a volcanic plug, on your left as you approach Marl Loch on your right as the path continues along the east side of the loch. Here you can spot swan, coot and mallard resting in the shallow water.

Shortly after this point you’ll turn left through a mini tree-tunnel before emerging out to see the wooden footbridge across the Peffer Burn stream.

The sign and local notice board gives you some information about the nature reserve and wildlife. The reserve is an important haven for birds and wildflowers. It is a perfect spot for the bird watcher all year round and the botanist as over 540 species of wildflower have been recorded here.

Crossing the wooden bridge (which is quite aged in parts and not for the faint hearted!) will lead you to a car park (with a bench resting spot and memorial to local writer Nigel Tranter) and from there you can follow the coastal road back around into the pretty Aberlady village. 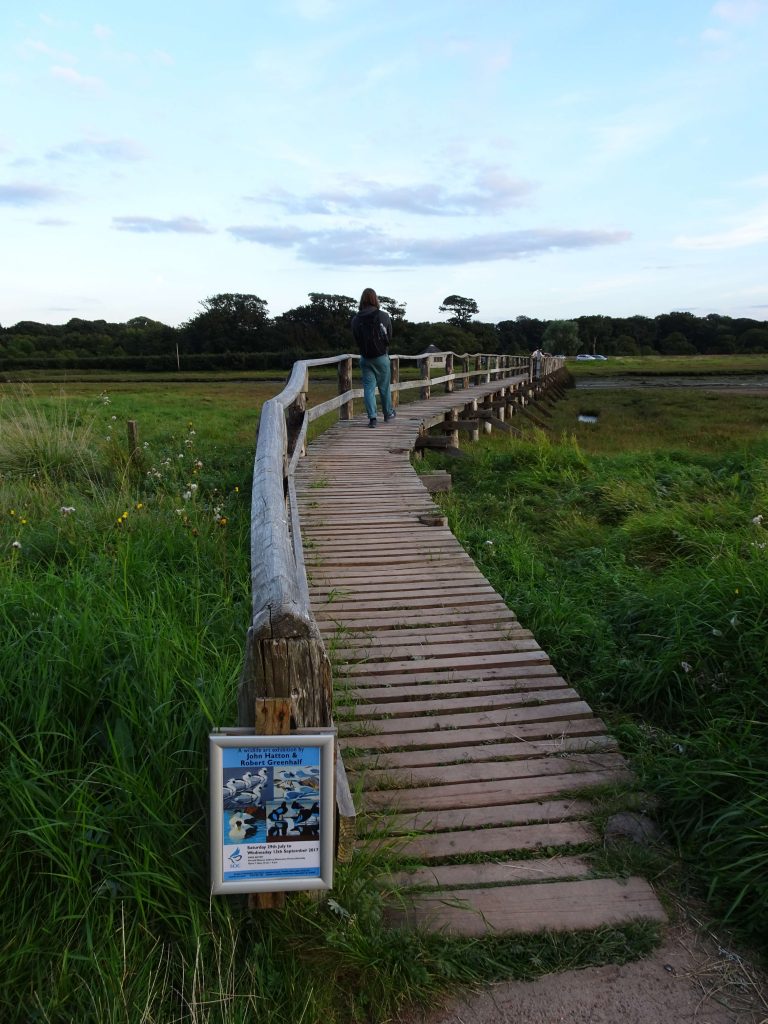 Finish crossing the wooden bridge and walking into Aberlady village

Don’t forget to look back and enjoy beautiful views across the estuary! 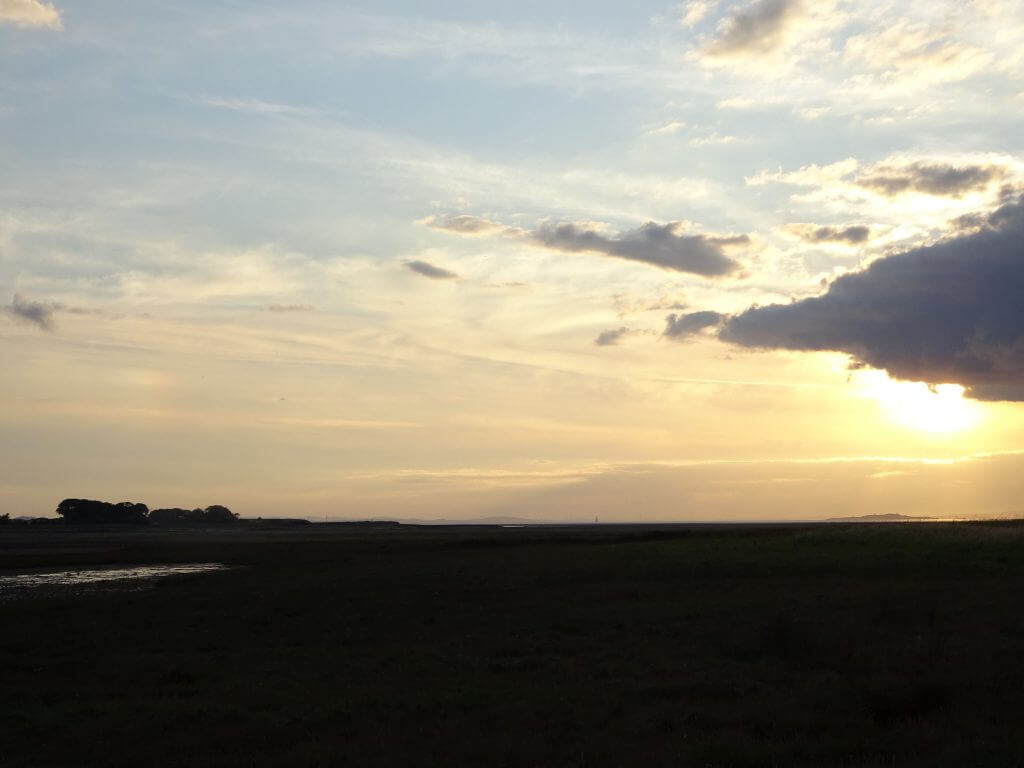 Thanks for reading! Have you done this walk? What were your highlights? Share your comments! 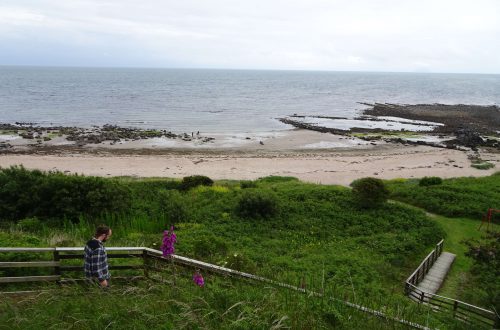 Silver Sands: The Best Beach On The Isle Of Arran